A Tale of Two Races

This is a story of two runners - Father and Daughter.

One ran a short 21 km marathon, and the other a long 21 meter race.

On 17th January 2016, Standard Chartered Mumbai Marathon, with minimal practice and almost out of form, I woke up early morning and prepared myself for my 3rd Half marathon.

The crisp and chilly morning wind was a good sign and as we warmed up at the entrance gate, I could feel the excitement and nervousness in the air among almost 15,000 participants at the start line.

I checked into my facebook account and dedicated my run to my daughter, Samaira.
Because nothing in the world drives inspires a parent more than their child.

As a parent- I know, that if a mountain had to be moved for their child, even the weakest person will become the mightiest.

I had promised her a day earlier I was going to get a medal for her and she innocently said,
“Run fast Papa, and come first”.

I promised her that I would run as fast as I could, knowing that she had no idea that no matter how fast or slow I run, I would get the medal, even if I crawled to the finish line.

These thoughts were quickly submerged by a load roar.

Back to Worli Sea Face.

And then it happened…

I saw a young girl, in her pink pyjamas, wearing spectacles, maybe about 5 years.
She was standing with a plate of biscuits, quietly and almost hidden in the crowd and she waited patiently for runners to take one, if they wanted.

It was 6:30am on a Sunday, she could have chosen to catch some extra sleep if she wanted or make some excuse instead of standing on a road, but she chose to come there, bearing the cold, holding her goodies for people she had never seen, met or known before.

By the time I could manage to get my thoughts together, I had passed her by a few meters. I looked back and thought that just to encourage her actions, I should take a biscuit, tap her little head and say “Thank You’, but by the time I could finish the thought, I was already moving ahead, and it was like swimming against the current to go back and put my thought to action. For a moment I even felt like going back, but I didn’t, it would affect my timing, and I pushed ahead.

I didn't know I would regret that much later.

For the entire Haji Ali sea front that little girl kept crossing my thoughts. Until I reached Peddar road and saw many other children standing there handing out sweets, water and oranges. I tried to thank each one of them, and most of them looked upon me weirdly, and some acknowledged with a smile.

It’s no surprise that I could see my little daughter in that girl and that’s a common thing we parents do when we see cute kids, which also made me tear up a bit.

For those who know me well, would know that I'm quite a leaking tap in the eye department that way.

I managed to pull through Marine Drive and finally up to the finish line at VT, in a decent timing for the effort I had put. About seven minutes slower than my regular timing, but I was thrilled because I was expected to complete in much more time than I did in.

Nonetheless, I took my medal and was satisfied I kept my promise to Samaira.

I almost could visualize her running up to me and saying, “Wow Papa, you kept your promise”, and that thought kept me upbeat even while I was feeling a bit sore in the legs.

Victoriously I went home and kept the medal at the bedside and waited eagerly for Samaira to return from her Grandma’s.

My heart skipped a beat.

She came running in the room.

I looked at her proudly.

Showed her the medal.

And she said… “but Papa, I wanted a Pink one, and a round one...not this.”
For second my heart broke.

And then we laughed.

She wore the medal and walked around the house for some time and finally returned it back and got back to her dolls and games.

On January 28th January 2016, about ten days after the marathon, on a hot so called winter afternoon, Samaira prepped up for her sports day.

Eager parents dropped their kids at the gate and they rushed to their teachers and friends, sharing none of the emotions of their nervous and anxious parents.

A year back, at the same ground, a timid, much younger Samaira stood at the start line and when the whistle went off, she ran hesitatingly and even though she picked up speed. She wasn't sure of what lied ahead and let other participants go ahead, and only after a few finished she went up to the finish line.

I will admit that my heart broke not to see her win, but the little one had no clue then of what was at the other end of the track.

We quickly made two assumptions that day.

One, she was not the sporty type, which was kind of ok.

Two, our daughter was more of the dainty type and would prefer to shine in a dance or fashion show rather than spoil her nail paint on a sports day.

So our expectations were not great.

But there is something that is yet to be told.

A day before the sports day, in a quiet moment, Samaira walked up to us and said- Mama Papa, tomorrow I promise you I will win in the sports day.

Understanding that she wasn't the quickest, we told her that no matter what, we would be proud of her and will always love her, whether she won or not.

Just before we left for the sports day, I asked my wife, Swetal, to take one of my older medals and keep it in her bag, which she did, but also told me that we should teach her what it is to lose.

The announcer, who also happened to be Samaira’s class teacher, told us to cheer for the march past and to out utter surprise we saw that our little daughter had grown up, and was leading her class proudly with a board that said ‘Junior KG – B’.

She made our day again (life actually).

We clicked pictures in spite of being told not to.

It was a moment to remember.

Our little baby who could barely crawl a couple of years back - was leading her class.
Every kid in the school had so much charisma and panache in their walk. It was unimaginable for us parents, to achieve even half of their confidence, if we knew we had to run a race in the next few minutes.

My mind took me to the marathon start line. I recalled that not one of us was walking confidently and enjoying the moment. We were busy discussing our timing targets, pace plans, hydrating, some praying, and some frantically pacing up and down.

After a couple of races, finally it was time for Samaira’s race.

My heart beat faster, but I hid it, and acted calm.

The whistle went off.

Within a few seconds, Samaira was at the finish line.

A volunteer was marking her hand and writing No.2 on it.

We were cheering at the top of our lungs.

“I told you, I will win a medal” she screamed to us from far, while her principal laughed and looked back, while honored her with her shining new metal.

She had kept her promise.

At the end of the sports day, she saw me from a distance and I ran to me with her prized possession, I picked her up and threw her in the air.

She squealed and laughed.

She knew Papa would never let her fall.

But she didn’t know that he would always help her fly. 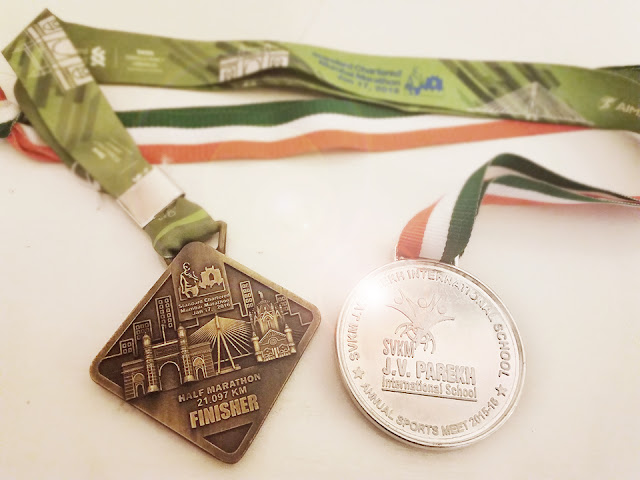 But there is a huge difference between the two.

My 21 kilometers was miniscule and too short a distance - Compared to your task of 21 meters, not in length - but in challenge.

You overcame more than me, because you learnt more.

Your hesitance transformed to confidence.

Your promise transformed to achievement.

And that’s how you emerged a winner.

There may be times that people may think that you can’t do certain things. But if you keep your confidence and passion alive, there is nothing that can stop you.

I lied to you about my medal.

I lied to you about my speed.

My medal was just about completing a race which I knew I could do.

You are too small now to know that, and I could easily manipulate you by just showing you my award with a make-believe story.

Your medal was an achievement of what no one thought you would achieve, but yes, all hoped you would.

It’s not just your win we celebrate; it’s the change in you that we are rejoicing about.

We know that you can’t win every race in life, and we don’t expect you to also. I couldn’t be more truthful than that but we are always there in case you feel you can’t even run.

There was a girl who stood early morning encouraging and handing out biscuits to runners, like me, whom she never knew, met, or seen in her life before, but she simply enjoyed the moment of helping others achieve their goal.

I selfishly was worried that I wouldn’t finish in my expected time and didn’t thank her for her gesture.

I know for sure, that this little girl will one day, run the Mumbai Marathon, and be cheered on by someone else.

I just hope that one day it’ll be a much older me, cheering on the sidelines, and she will take a biscuit from my tray.

Do both and do them with utmost sincerity and honesty and most importantly enjoy this inevitable race of life.

Always remember that in life, saying ‘Thank you’ is one of the most important things we should do and it costs nothing but means everything to the person who stands there for you.

Thank your teachers, your friends and your elders.

There is one more thing I learnt.

The actions of parents matter more than words.

If my action inspired you even by a percent I will feel that I have done my role as a parent.

I am not taking away your spotlight. That’s yours only.

But you must know that we will always be there as an audience or spectator watching you, with our hearts racing, no matter what you set out to achieve in life. And we will pray and prepare you, so you can give your best.

We will cheer and clap the loudest when you win, and teach and encourage you the most when you don’t.

We know that if you put your mind to something, you will achieve your best.

And if nothing, remember your Mama and Papa will always have a prize in their bag ready for you,
- and that prize is Love.

And our Love can be whatever color and shape you want.