5 Stories for Parents of Different Religions

I am born to parents that are from different faiths. My dad is a Muslim, and my Mum a Christian. My wife is a Gujarati, Jain.

We have a 5-year-old daughter.

If my mother were alive today, my parents would have celebrated their Golden Anniversary soon. An interfaith marriage that long back was a rarity, unlike how common it is today.

This article in intended to share my first-hand experience as a child born with the confusion, a father trying to resolve it and to give clarity to those parents who would be worried about their own child’s dilemma, as they grow up.

The article is not intended to open debate, spark an issue or answer questions on what one should do or not do when in the situation.

There was a time when my mum would pray in front of an Altar, in her bedroom, my Dad would pray with a tazbih in the living room and my wife would be reciting the Navkar mantra in our room, all at the same time.

There is a drawer in my house where the Bible, Quran and Bhagwat Gita are kept together in peace, and they don’t step on each other’s toes, instead exist in the same beautiful fragrance.

And I have best friends from all faiths, Hindus, Muslims, Parsis, Christians, Sikhs, Jains, Jews - you name it.

And the good news is my tribe, of multi-faith children, is growing.

Like other kids who are born from parents with similar faiths, this is something that multi-faith children were born with and not something they chose.

It was something that was given to them even before their name.


There are 5 true life stories I would like to tell you.

I was 5 years old, and it was my first day in a Jesuit (like convent) run School. After the first two periods of English and Maths, I eagerly awaited the next session.

A young teacher walked in and announced, “All catholic boys proceed to the church, and all non-Catholic boys stay in class, for Value education.”

As mentioned earlier, my mother was a Catholic, and my father was a Muslim. Every Sunday morning, my mother would take us to church to attend Sunday mass, and we would go in happily. We knew the church prayers, the hymns, the stories from the Bible and we even celebrated Christmas and Easter at home with all grandeur.

My father, was not a big fan of his religion and the only part Islam we followed, was on Eid, when we would have relatives come over, and we would celebrate with sumptuous food and also get some Eidi (Money given to kids as a gift on Eid).

Coming back to the classroom, there I was, a confused kid, not knowing which class to attend.

The one for the Catholics?

Or the one for non-Catholics?

So I walked up to this new teacher, introduced myself (Just my name - Aleem, gives a lot away about me) and explained her my dilemma.

She asked me what my father was, and I said – Muslim.

Sit in this class; it’s for boys who ‘follow’ other religions.

“But teacher, I go to the Church and follow Christianity”

For the next 10 years in school, I was a student of the Value Education class.

Many years later, coincidentally a similar thing happened, there came a time, when my daughter was 3 years old and it was the holy month of Paryushan, a festival followed by Jains, like her mother. All Jain parents had written a note to the teachers, on which students will be eating Jain food.

My wife too wrote to the teachers and asked them to include my daughter in the Jain list.

That afternoon, when we went to pick her up, the teacher was curious to know why we had included her too in that list and felt we had made a mistake.

On learning that her mother was not only a Jain by birth but the fact that both practised the religion was a pleasant shock to her.

I later learnt that my daughter convinced the teacher herself that she would be eating Jain food during those days.

Sitting through these situations, I realised that the world judges based on your name or surname, and not what you followed.

I learnt as I sat in the value education class, that the teachings in that class and the teachings of the church, and as I went on in life to follow teachings of most religions too, that they all are beautiful, and teach similar things.

So while you think there’s nothing new to this what I am trying to say is deeper.

Today I am as comfortable inside a Mosque, Church, Temple, Derasar, Gurudwara, Synagogue or Shrine.

Multi-faith kids like me realise that all religions are equal at ‘a very early age’, and that gets rooted down to their souls. They become more tolerant, understanding, and emphatic to people.

Isn’t that a wonderful thing for the world they will live in?

A world, where national integration begins at home.

One day when my daughter was about 3 years she asked me, “Papa, why only boys watch Avengers and girls watch Barbie and Princesses?”

But I was glad I took my time to respond, because she immediately asked me if it was ok that she liked Captain America also, and if a close friend of hers who was a boy, liked Elsa from Frozen.

Darling, you are free to like whichever character you like. Not only that, you must watch the movies of all the characters and you never know which part of which character you will go on to like.

And religion too isn’t too different.

Celebrate all festivals. Visit all religious places. In India, and around the world. You will experience endless joy throughout your life. In that way, you will learn to respect each other’s religion.

Imagine a world, where we all learn, respect, adore and enjoy each other’s faiths with no presuppositions. Take the best of it and make it your own. Like a movie, where a princess falls in trouble and Captain America comes and saves her.

We mix-breeds are lucky that we get to “learn all and pick the best” and make our own, and not those that are dictated by a person, a book or a ritual.

These beliefs are well thought out and by us and that makes it more rational and practical at times.

3. “Belief in God is important, not religion”

Many children wake up in the middle of the night due to nightmares. And parents will always coax them, comfort them, and then ask them to pray to God. But in doing that they also mention ‘which God’ to think about.

In my case, my daughter had a strong attraction to the Lord Ganpathi. It wasn’t something we taught her, it’s just something that she got hooked on to very early.

I clearly recall one night she woke up really scared and whispered in my ear that she had a bad dream.  I asked her to pray to God to give her peace. After a few minutes she went off to sleep, and while I was tucking her in her quilt, I saw that her hands were still folded, so deep was her faith and belief.

The point I want to make is that one must always know that even in the toughest situation, God is someone you can always hold on to.

In my growing up years, I went through a patch of being ‘too cool for religion’. In a bid to avoid being asked which religion I followed, I used to say I was an atheist. A non-believer of God. But as I went on to grow up, and experience difficult phases in my life, I realised that when there was nothing to pull me out of darkness, when there was no hope, there always was God you could pray to and ask for help.

God forbid, but life does throw nightmares in the real world too, and in those times we must hold on to God.

And it doesn’t matter which image or prayer you hold on to.

You must be thankful to the creator, and once again we are lucky because we have multiple visuals to choose from. Take your pick.

When we moved into our new office in 2016, we challenged one norm.

Business inaugurations are normally done in the Hindu ritual. It's something someone never questioned and no one really had a problem with. It’s just something that was done for centuries.

But coming from where I do, and seeing that we had people from all faiths in our office, we decided to have an inter-faith opening prayer ceremony. And with mutual respect, we had staff conducting prayers from all faiths blessing our office. The vibe was so good, and the feeling of positivity was so high, that I strongly believe that it was one of the best ways to start something new. 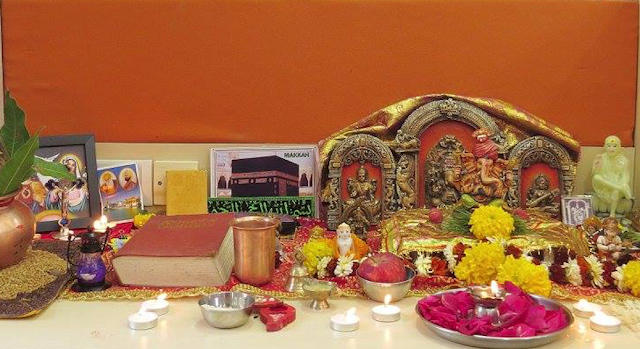 This credit goes to the tolerant upbringing I grew up in. And the thinking of such ideas comes when you open up your world and your eyes.

Such ideas can help these children build a better world.

Here’s a video I really liked of a father teaching his daughter an affirmation. I’ve typed the words and placed it in our home. I like the fact that my daughter can read this once a while, and it reinstates her belief in herself.

At some point in time in life, one gets too busy and has no time for God, religion, or prayers. But then again, what are mugged up prayers anyway.

Prayers are and were intended to be a way to reach out and communicate with the creator and sometimes with yourself.

There are beautiful affirmation statements you will find if you search.

Download anyone you like, print it, laminate it and paste it on a mirror in your home.

And every day before you leave home, just glance at it and encourage your children to do the same.

And at the end of this, what I am trying to say.

I believe that celebrating and following multiple religions, just like following a single religion can enrich and strengthen families and greatly benefit children, our country and the world.

Being both is not simply a compromise or a negotiated settlement, but a path to a positive, inspirational life.

So if you are a parent in an interfaith marriage and reading this, feel privileged that you too are raising a child that will be a good citizen of the world, if groomed well.

If you are a child, of interfaith parents.

The objective of this blog is not to hurt anyone’s sentiments, faith or beliefs. We all are equal and each one is subject to their personal opinions. If anyone is hurt with any of my thoughts or words.

Posted by Aleem Merchant at 8:23 AM