Why are you Daddy's Lil Girl?

The thought “if something happens to me” props up once a while in everyone’s mind and I am no different.

But the thought of “If something happens to me, you would never know that I wanted to tell you…” is even more disturbing.

If something does happen to me, there is one thing I would always want my daughter to know, and that is WHY she is and always will be Daddy’s lil girl.

While a lot has been said and written about father-daughter bonding, I have a completely different perspective to the reason why daughters will always be that special girl in a man’s life.

Something that probably not many people have spoken about (because of the backlash that would follow) ;-)

Since this is a public blog, if you are a woman and if you are married, it is essential that you read this piece as a daughter and not a wife.

If you are a guy, no instructions for you.

There are 3 women before a daughter, in a man’s life that shaped him.

His Mother. His Sister and His Wife.

A mother is someone who nurtures him. She is kind and yet strict. She teaches and she corrects. No one can replace the role of a mother in anyone’s life because that is immaculate. But a mother’s job is also to prepare you for the real world. So she reprimands where necessary. Not only does she point out your mistakes, she also helps you correct them. She makes sure you put on a brave front in difficult situations. While she is always there for you, she is also the one who will leave your hand so you can walk on your own. Even after marriage, she tries her best to ensure that you are in good hands.

A sister plays no small role in a man’s life too. She teaches you the importance of sharing and caring. She guides and learns at the same time. She grows with you and sometimes outgrows you. From her, you learn to give respect and you learn to earn respect. You learn to fight and you learn to make up. You understand boundaries and you also understand how not to cross them. She is the one who will teach you to ride a cycle and she will also be the one who will quietly take her hand off from the seat so you balance on your own. And in that moment she will break your trust with the sole intention of building your confidence at the same time. She is the one who you learn to keep secrets with, to keep secrets from and then probably learn to confide in later too.

And then comes a man's wife. The epitome of all his relationships. The one who will help him settle down and yet always push him to fly. The one woman who loves and accepts him the way he is and the one who still not take anything for granted. The one woman who will help him achieve his full potential and also remind him of his usual pitfalls, for his own good. A wife will love him, care for him and stay with him no matter what and at the same time fight with him and then turn around and cook his favorite meal for him. She teaches him what stability is in unstable conditions. She walks his most difficult path with him and yet helps him look at the wonders that come along the way. She becomes his best companion, friend, guide, and partner and when the going gets tough, she helps discover another reason to be tougher again.

And then comes his Daughter… (long pause) 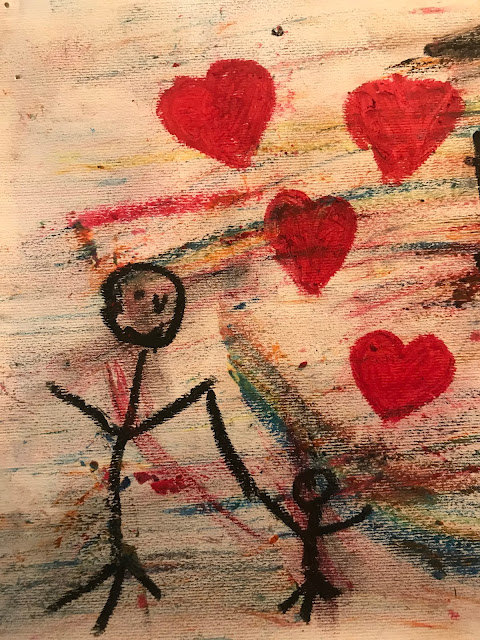 (Illustration by Samaira Merchant when she was 5 Years)

The little wonder that wraps her hand around his finger no matter how soiled it is after a hard days work. The girl that will jump from the highest point and trust that her father will not let her fall because she doesn’t know what falling is, but knows what trust is.

The one who will blindly follow his footsteps no matter where they go. She never complains about the situation he keeps her in, and in fact, keeps them in her heart as the fondest memories of her childhood.

She makes him her first superhero.

She grows up a bit and says that she will never marry anyone and will stay with him forever (and she means it with all her heart).

She's the one who raises her eyebrows and smiles, impressed when you dress up in a business suit and without saying a word, says so much.

She's happy when all he got her from the store is a candy and she still loves him when he tells her that he didn’t carry more cash to buy her what she wanted.

She hugs him at night when she has a nightmare and sometimes when she doesn’t have one too.

His advice is the one that she relies on most. His opinion is the one she counts on most.

Thick as thieves when caught in a prank and she knows he won't tale-tell. The one she winks at when she’s up to some mischief. She’s the one that helps him discover his childhood again.

She teaches him so much without actually teaching anything.

And that’s the difference.

The difference is that she accepts him as the most perfect man in the world. The one she wants her life partner to be like only because there was nothing wrong she saw in him.  In spite of his faults, shortcomings, misgivings, and mistakes, she never makes him feel that there is anything wrong with him. The room in her heart is so huge and beautiful for her father that small specs of dirt are never noticed.

And so… if something does happen to me I would always want you to know that you are Daddys lil girl because you are the one who accepted, loved and cared for me the way I am, and you never ever did anything to change me.

You are the one who “didn’t” complete me. Because you didn’t feel the need to.

Posted by Aleem Merchant at 3:14 AM