My Daddy (is not the) Strongest

In an advertisement or a film, a father is normally a good looking, healthy, fit, fair, well groomed, sometimes rich, in a suit, with a massive bungalow and a fleet of cars, with naukar-chakar and the works.

But in the real world, Dads are different.

Some are short or dark or podgy, paunchy, or partially balding. Not always rich, rather making ends meet.

Most of us don't always fit the description of clever, intelligent, shrewd or a sharp businessman with a towering personality.

When my daughter had just learned to talk, I had trained her to complete the sentence, when I asked her...

Some weird joys we fathers get.

One day, we were going through a couple of my old college photos, and she said,

I suddenly felt that maybe she now thinks that her Papa is not the greatest. I am not the superman that I wanted her to believe I was. I am not the one who she would look up to rescue her in times of need.

Maybe she had seen a lot of her friend’s fathers and she preferred them to me. Some were taller or better looking, stronger, richer, and more fun to be with, more intelligent, kinder, nicer….  Aarghhh!

I mean what was I thinking. Just because I run a marathon (with 1000 others) and get her a medal home (because everyone gets one) I would become her Hero?

Or just because I get her a cheap toy from the store, and sometimes a chocolate when she throws a tantrum, I would be her knight in shining armor?

Just because I tell her that I go to office to earn money and we can buy whatever we want, I would become her Idol?

I don’t know what made me think that I was even capable of being good enough, forget great? 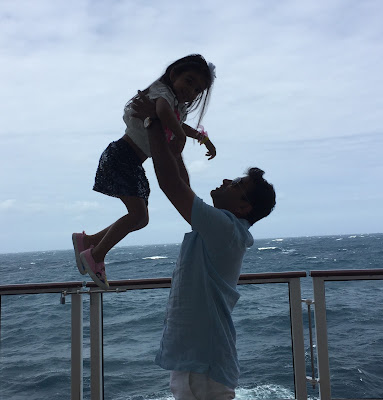 It was a pleasant summer day, we were all in the pool, and having a good time. She was playing in the shallow, where she could comfortably walk and didn’t need a float.

Suddenly her foot touched the point where it sharply slides to the deep. She lost her balance and was about to tip over. I still remember the look asking for help, she gave me just before she lost her control. Out of reflex I just caught her and put her back on safe ground.

She went on to playing her game. Neither of us said anything, and continued what we were doing. But then she just turned around and gave me a glance, and her eyes said more than she could.

That moment I realised that fathers are not about being tall or short.

Fathers are about being there, about showing the way, about guiding, and encouraging.

Come to think of it, in the real world, it's actually these kids who are stronger.

First day at school with strangers in a room cannot be compared to a social function where we can simply hide our faces in a phone or rush to the loo as an excuse to not wanting to blend in.

A School Sports day cannot be compared to a registered marathon where the points don't matter and neither does your rank. You arent expecting a podium finish anyway.

Their dance at a school function cannot be compared to a office presentation considering the pressure we put on the kids and the sheer number of people watching.

Examinations and school assessments cannot be compared to client review meetings knowing that even if we make a mistake we can simply pass the buck.

So it may be a nightmare, when all they need is a hug.

A remark from their teacher, and they needs someone to tell them that it’s OK.

Something they fear doing and they just need a helping hand.

So here’s a promise from a father.

No matter what you need, when you need it, and how it needs to come to you.

There will be this short fellow, with as of now a receding hairline, who's not the best looker, not so rich, or clever,  with various shortcomings...always there for you to ensure you don’t tip over.

No matter how tough the situation is, he will bail you out, and it does'nt matter that your daddy is ‘not’ the strongest.

Whats matters is that your mother, you and I, are together and nothing in the world is stronger than that!

Happy Father's Day...to me, for playing the role, in this super-hit film called life.

Now someone please call the casting director... and fire him!
Posted by Aleem Merchant at 3:36 AM